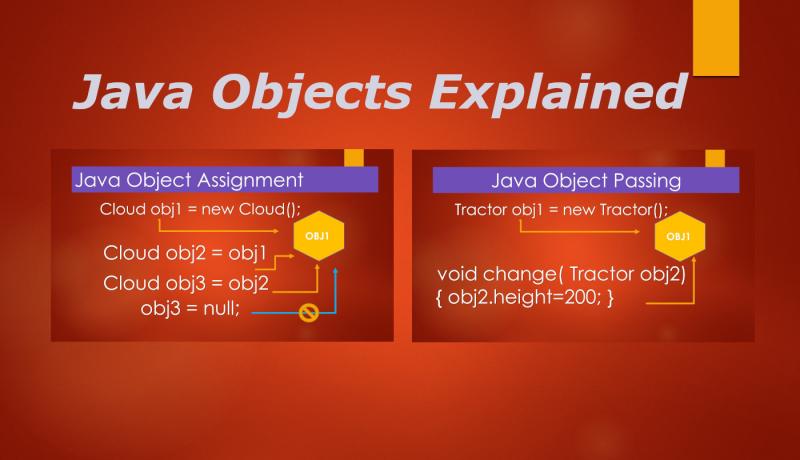 You may also read about Introduction to Java Class Structure.

In Java, objects are always passed by Reference. Reference is nothing but the starting address of a memory location where the actual object lies. You can create any number of references to just One Object. Let us go by an example.

We create a Class "Cloud" with a single Property called "color". It is a String object. We create 3 objects of the Cloud type.

Notice that all three references obj1, obj2 and obj3 are pointing to the same Cloud object. Thus the above example outputs the same color-property value "RED". Later, we made the references obj2 and obj3 to point to the null location. Still the original object pointed or referenced by obj1 holds the value. So the final PRINT statement outputs "RED" as usual.

Note: Reference is also called a Variable whether Primitive or Object.

Java Object Passing by Value or Reference to a Method Explained

You already learnt that Object assignment in Java happens by Reference. Let us try to pass Objects to another method as a parameter or argument. We try to know whether Objects are passed by Value or Reference to another Method using the below example.

In the above example, we have created an object "obj1" of type Tractor. We assigned value of 100 to the property "height". We printed the value before passing the object to another method. Now, we passed the object to another method called "change" from the calling-method "main". We modified the height property to 200 in the called-method. Now, we tried to print the value of the property in the Calling method. It shows that the Object is modified in the called-method.

Similarly, we can pass Java objects to the Constructor using Pass by Reference or simply Reference.

This concludes that Java Objects are passed to methods by Reference. Here also, we pass the memory location pointed by one Reference variable to another Reference variable of a Called method as a Value only. So, you are actually passing Values (memory locations represented by integer or long data type). But the actual passed-object can only be referenced by a Reference variable. Interviewers take advantage of this tricky logic to confuse you. If someone asks in C language point of view, say that it is by Reference. If they ask in Java point of view, say that it is by Value.

Let us know more about Java Classes with different Constructors and Methods in coming chapters.